SVT World was Sweden’s television abroad channel for Swedish-speaking people in Finland and Swedes abroad. Due to a decision of the board in October 2016, the broadcasts were closed on 30 April 2017.

In the late 1997, SVT started broadcasting via satellite to Swedes living in Europe outside Sweden. The programmes in the channel comprised SVT material from the Swedish channels. This was a digital channel, which is made available through the use of a special decoder card that is provided. The Swedish Broadcasting Corporation (SVT) payed remuneration to Copyswede based on the number of cards issued each year. This remuneration covered the rights of authors, performers and phonogram producers.

SVT World was the international channel of SVT, to be watched both by satellit and/or IPTV. The channel has been transmitted digitally by the two satellites Eutelsat 9A and Thaicom 5. The channel was transmitted both digitallly and encrypted by IPTV worldwide. IPTV is television by broadband. The set-top-box was connected to the television set and to a broadband connection. The tv-signal was by Internet instead of cable or parabol.

SVT World was also retransmitted simultaneously over the air in Southern Finland. The retransmission was licensed by Copyswede´s sister organisation Kopiosto. Copyswede received remuneration in accordance with a reciprocity agreement with this organisation. The composers share was already have been deducted and passed on to STIM by their Finnish sister organisation Teosto. Copyswede distributed remuneration for the transmission of SVT World within the framework of the same distribution system as for cable TV remuneration. 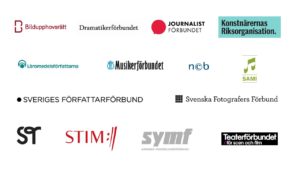